IS CORONAVIRUS CRISIS LEADING US TO GLOBAL DEFLATION OR INFLATION?

One of the main debated topics among macroeconomists today is about the outcome of the coronavirus crisis and authorities’ reaction to it for price development in advanced economies.

Will it lead to inflation or deflation? The answer depends on the magnitude of supply and demand shocks that the crisis invoked as well as on the policy responses of governments and central banks.

The massive economic stimulus amid the supply disruptions imposed by lockdowns around the globe raised concerns that inflation may surge as a result, probably when lockdown restrictions are eased (Goodhart and Pradhan, 2020). But many economists worry instead about deflation, or at least less inflation than they would like (e.g. Blanchard (2020), Miles and Scott (2020)).

The latter view is currently supported by financial markets: the expected inflation proxied by the difference between the rate on nominal bonds and inflation-indexed bonds is about 1%. Thus, investors predict that five to ten years from now the Fed, ECB and Bank of Japan will not be able to fuel inflation up to their inflation targets (2%). Expectations for average inflation in the US over the next decade calculated by the Federal Reserve Bank of Cleveland fall from 1.7% in January to 1.2% in April, the lowest historical level (figure 1). 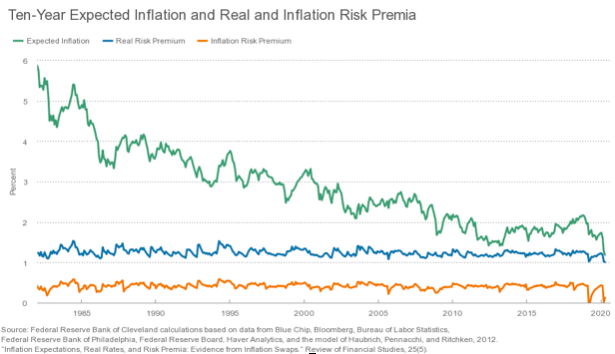 Falling commodity prices is another important signal. Moreover, extremely low energy prices will pass through to other prices in the economy during the following months intensifying the deflationary pressure. Besides, annual headline and core inflation declined in the US and Euro area in March compared to February.

Other arguments for prevailing deflationary pressure to persist in the nearest future are the following:

The main risk for deflation scenario not to be realized comes from political considerations. Nowadays, high inflation appears as the most desirable policy response to the current crisis. This may be coupled with financial repression through which the governments will try to stimulate demand for their bonds.

If inflation happens to accelerate significantly due to the massive fiscal and monetary stimulus, monetary authorities would have ammunition to slow down inflation to a desirable (targeted) level while imposing the additional drag on economic recovery. However, such experience of monetary financing of public spending may provoke enormous political pressure to keep the support. It will be forced by the intention to lower the debt-to-GDP ratio primarily through higher nominal GDP  (reflecting the so-called “fiscal dominance”) while imposing an “inflation tax” on savers. And if  central banks try to raise interest rates in such a context, they will face political ires to a point that might threaten their ‘independence’ (Goodhart and Pradhan (2020)). Probably, the Fed should be much more concerned about such an outcome, while the ECB is more shielded by political preferences for low inflation.

Another potential risk is stemming from the deterioration of Sino-American relations amid the blame game for the COVID-19 pandemic and  reemerging trade wars. Under this scenario, rising import prices may push upwards overall inflation in the US. Growing protectionism at the global scale may bring the same outcome.

While in general we think that the baseline scenario  is a low-inflation environment, there are two important caveats here.

First, as pandemic causes dramatic changes in economies’ structure and agents’ behavior, the measurement of consumer inflation will be a serious challenge in coming months. Goodhart and Pradhan (2020) state that “at a time when the basket of goods and services that we buy has so suddenly been distorted out of all recognition, it will become almost impossible over the next few months to put together sensible and meaningful data for CPI, RPI, or any other inflation series”. That may distort significantly both the inflation statistics  published by national statistical offices and authorities’ reaction to them.

Second, the same dramatic changes in consumer patterns caused by pandemic definitely will lead to significant relative prices movements. While prices for the most durables and services may remain subdued for some time, prices for some goods and services may jump as a result of switching consumer preferences.  For example, prices for pharmaceutical products and medical services most likely will accelerate due to strong demand and rising labor costs. Also, food security considerations may cause some countries to implement restrictions on food exports leading to shortfall of supply and hence raising food prices in advanced economies (AE).

Besides, there has been a strong demand for online services (like online TV, games, educations, etc.) and IT hardware since the start of the quarantine, which is expected to continue. However,  such demand will likely stimulate the increase in supply and will not lead to sizable inflation movements as the last decades show. Meanwhile, increasing demand and production (together with business investment in IT infrastructure) may push the demand and prices of important intermediate products like rare earth elements.

Such low-inflation and fuzzy environment in advanced economies may bring both challenges and opportunities for emerging markets (EM) including Ukraine. On the one hand, commodity exporters representing the majority of EMs usually suffer during low-inflation periods. On the other hand, lower imported inflation widens the room for domestic stimuli via fiscal and monetary tools. However, as always, such stimuli have to be well calibrated in order to maximise the economic recovery while ensuring price and financial stability. In contrast to AEs nowadays struggling to fuel inflation expectations, authorities in EMs like Ukraine may easily reach such outcomes but with negative consequences for macrofinacial stability and thus undermine the economic recovery from lockdown.

ICU founder Makar Paseniuk became the co-chairman of the Board of Directors at ...

ICU recognized as leader in asset management and corporate governance in Central ...

ICU recognised as the largest Ukrainian government bonds trader for the 10th ...

"DYNASTY" RECOGNISED AS THE BEST OPEN PENSION FUND IN UKRAINE

Government should stop the “ritual dances” with the IMF: Makar Paseniuk on coronacrisis ...

Sergiy Nikolaychuk is appointed Head of Macroeconomic Research of ICU